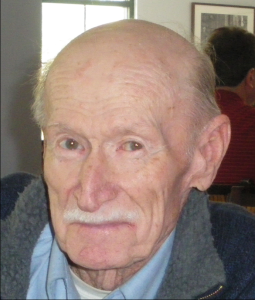 Captain Francis “Tiny” Clark, 92, of Jamestown, RI passed away peacefully Tuesday, December 31, 2013 in his home surrounded by his loving family. He was, and is, a kind and gentle soul and the beloved husband of 57 years to Maxine M. (von Schade) Clark. Born in Wakefield, RI, he was a son of the late Earl C. and Frances C. (McKenna) Clark and grandson of the late James Everett Clark.

Tiny proudly served in the US Navy during WWII. He was a Gunner’s Mate First Class Captain of gun mount #1 on the Fletcher Class Destroyer USS Hall DD583 in the South Pacific, where one of his many experiences included witnessing the raising of the American flag on Iwo Jima. He was the captain of the motor yacht “Thania” which when donated, started the Herreshoff Marine Museum in Bristol, RI. Tiny owned and captained three fishing boats. He also was the owner and operator of The Round House Shipyard and Clark Boat Yard in Jamestown. He worked for NUSC at the Newport Navy Base and the New London Navy Base in CT where he ran a 72′ torpedo retriever and a 60′ landing craft. He also ran a 90′ cruise boat out of Wickford.  Tiny worked as a shipwright at Norton’s Shipyard in East Greenwich and Wickford Shipyard in Wickford. He was a member and adjutant of the Jamestown VFW post 9447 and a member and past president of the Jamestown Lions Club. Tiny enjoyed spending time with his family. He was an avid reader and loved baseball, especially the Boston Red Sox.

Besides his wife, he leaves four children, Michael F. Clark , Sarah E. Clark and her partner Noah Anacleto, James M. Clark of Jamestown, Gary M. Clark and his partner Kristen Cornwall of Kingston and two grandsons, James J.M. Clark and Benjamin D. Clark; a sister, Judith Reiber and her husband Bruce of Madison, CT. He was the brother of the late Elizabeth, Jacqueline and Robert Clark and Mary Ellen Morrison.